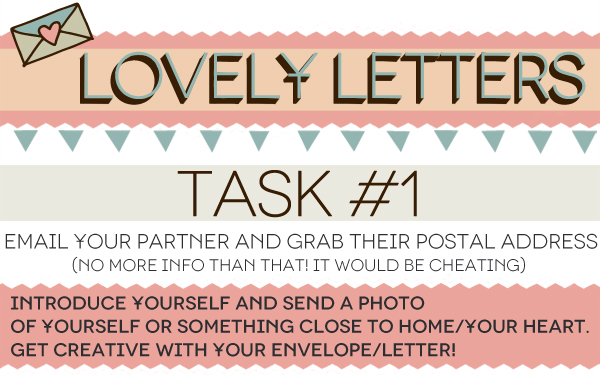 I came across Kitty and Bucks and Modern Buttercups  Lovely Letters Swap on a few blogs and loved the idea of it so had to take part. I wasn't actually sure which blog to post it on but in the end decided that since this is going to be a project over 8 weeks I will blog about it here.
I waited patiently for my partner and I was actually looking forward to getting someone that I hopefully hadn't come across whether male or female but also with the possibility of it being a UK pen-friend since they mentioned trying to partner people close by. I have always mostly written to people outside the UK so at times I think I would love to write to someone closer to home. Still it probably cheaper for me to send mail abroad then in my own country these days.
Well the day arrived and went by... but still I continued to wait and eventually 2 days later I got an e-mail to announce my partner who is from.... Portugal which I'm not actually sure if I've ever written to anyone there (if I have it wasn't for long as I can't remember them) but also I've got a partner 10 years younger then me which is something else new for me as I usually only have friends with about 5 years difference between us which of course was all part of meeting someone different for me. I'm sure we'll get along fine.
I really wanted to make my own paper for this project but those of you that write to me will know how much I can chatter on that its quite impossible to estimate how many sheets I'll need. Also with time being some what limited as the deadline to send was the 9th October I had to think of a letter set to use instead. One of the things my partner listed about themselves was a love for collages which instantly made me think of using one of my many collage style sets and this is the one I'd chosen to write on... I received this letter set for my birthday and loved it a lot on opening it but it didn't suit my writing at all and I hope my partner was able to read my letter which as usual ended up extremely long so I hope it wasn't off putting as my partner I guess is in to shorter letters as I received a page from her along with some interesting photos of where she lives. I decorated the envelope according to what was going on the pages even though it isn't as colourful.

I didn't have a recent or nice photo of myself so I included some collage pieces as something close to my heart as I letter writing, paper crafts and reading are my wind down things. This is the envelope she sent me which also fits in with my theme of collages. Whilst writing to my partner my mind kept jumping ahead to what letter set I would use next time to fit in with her other loves...
Did you also take part in this swap?
Have you blogged about it as I'd love to see your creative envelope but also your create letter too.
Posted by Bubbles at 20:38