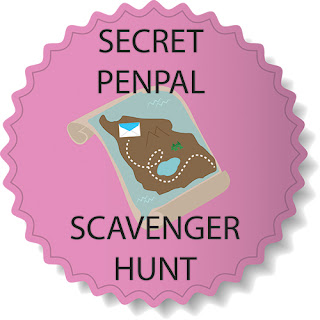 I think I've really started to get addicted to these blog swaps as this is the 3rd one I've taken part in and really enjoyed it.


I took part in Wreck This Girls Scavenger hunt and the idea was that from a list of 10 prompts I had to choose 5 that I wanted to match a gift to and the 6th was to choose a gift for my partner from her likes.
The person I sent to was not the person who sent to me which was nice as it kept the mystery of it all that more exciting as to wondering who you'll get and what you'll get as each country has completely different things to mine.
This however means that this post will be a little photo heavy as I was lucky enough for mine to reach its destination and to receive mine way in advance. Its times like this that I really miss Picnik, I wish they had sold their rights instead of closing completely as I haven't taken to picmonkey at all.
Anyway the person I sent to was un-deux-kiss in India. I got such a shock when I saw India and then suffered every emotion in the book because we have sent mail to Pakistan a couple of times and less then half of it has ever reached home. I was at first going to put really basic things together so that I could easily replace them if my parcel never reached my partner but then I felt that was really unfair because I'd be so disappointed if it was me. It all worked out nicely and I had no reason to worry as I posted my package on Friday evening and when I checked my phone at work on Tuesday afternoon my partner had sent an e-mail saying she had received it. Talk about express mail, I'm over the moon as that meant my package didn't look like it had been in the war on arrival.
The other problem I had was that there wasn't enough information of my partner's likes so I didn't want to get her something she would also be disappointed with. With living in Bradford also majority of the shops I go to sell items mostly from India so I didn't want to get her something she may also be able to buy there... oh what to do! In the end I just took a plunge, kept it neutral and put my partners package together. The funny thing also is that my partner by chance came and liked a photo on my Instagram but it didn't reveal much about her which is a shame
Well anyway I better get on and show you all....

Something That Represents You

Some of you will know that I've been making stars like crazy so in some sense it represents me this way. The other is that with being of Pakistani origin I tend to wear bright, colourful, shiny and over the top stand out clothes and my personality matches it a little bit. My packaging had to be plain and questionable to start with to get that burst of colour on opening. I was so worried these would get squashed as I've always sent them in a box but thankfully they did not.

Something Not Square or Rectangle

I've always wanted to make a garland/bunting so this was the perfect opportunity, my photo isn't the greatest to show it to you as there are little maroon coloured bows, I do have other photos on my flickr but they aren't brilliant either.

Something With An Animal(s) on

This one started as a tough one but then I remembered I had this extra tape. I bought the bigger one as I loved it a lot and later bought a small set of 3 with this one included so my partner could have it. As I mentioned to my partner also, it has a very Alice in Wonderland feel to it which I have quite a few sets of.

Who couldn't use a pocket mirror and Keyring, you can never have too many!

I would have loved to have sent an Easter Egg which is the craze at this time of year but I'm not sure how hot it is in India now. So the next best thing was Easter cards which I hope my partner will enjoy sending to her friends. Its funny that my partner has the exact same card on the top in her photo. I do have another one but minus the spring envelopes.

My partner listed for her gift stationery or tea but as I'm not in to flavoured tea the next best thing was stationery. As I was going to pay for the items above I saw something out of the corner of my eye that I decided to investigate in case I could buy that instead. On getting close to inspect it I noticed this letter set. I could only see the front of it so for the price I imagined something really basic and plain. I picked it up, turned it around and fell in love with this cute little bear. I bought 2 for me and 1 for my partner, I was going to wait before using it but couldn't resist it anymore so have opened this set and I'm half way through my letter with it. The sheets are bigger then A5 but smaller then A4 and the quality of it is amazing as the sheets are so thick with a lovely feel to it.
The Note

Now on to my package from my partner from the U.S

I have a little collection of bracelets that I wear to weddings but this one will always be special and its the first handmade item of jewellery that I have ever received and its just amazing. I'm really looking forward to wearing it. The other thing that's a first is the knitted scarf... this lady has really spoilt me with these amazing handmade items. The wool of the scarf is so soft, I wish I'd received it sooner as this winter has been so cold!

Something Not Square or Rectangle

A chipboard heart. I'm sure I'll think of something to do with this.

The note cards are great, Don't you think? Tags for bookmarks maybe? Notepad and pen for lists? and Origami paper for Paper Cranes? These are such great suggestions from my partner. By the way I've never tried making cranes but after receiving these I really need to have a try.


Such a fun swap, I'd definitely do it all over again!
I hope that you received great packages.

Thanks Wreck This Girl For Organising this great Exchange!
Posted by Bubbles at 21:53